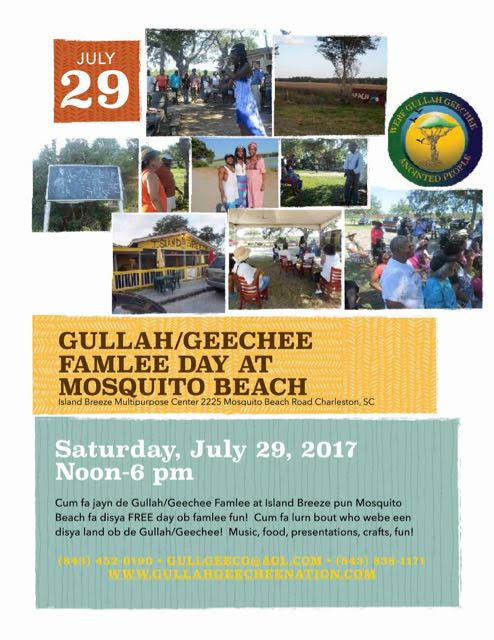 (7 July 2017, Charleston, SC, Gullah/Geechee Nation) Charleston County, South Carolina is the place of origin for the Gullah/Geechee culture.  Gullah/Geechee people brought their African traditions with them within the enslavement vessels that they were held captive in as they journeyed across the Middle Passage.  Many have come to the shorelines of South Carolina to stand on the shores of the Atlantic Ocean to feel the ancestral energies of the Africans that have come to be known as the “Gullah/Geechee.”
During the period of segregation many people of African descent were unable to stand on the sandy shores of the Atlantic Ocean.  Instead of enduring harassment and discrimination at “colored sections” of areas that are now part of South Carolina’s state parks, Gullah/Geechees often developed their own Black townships and beaches.  Amongst the list of Black beaches and gathering locations in South Carolina were “Riverside Beach,” “Frasier Beach,”“Remley’s Point,” “Peter Miller Pavilion,” Seaside Beach” (part of “Edisto Beach”), “Atlantic Beach,” and “Mosquito Beach.”  The latter are the only two that remain in existence.
Many that made their way to James Island or Folly Beach did not and do not realize that there was a major gathering location adjacent to Sol Legare Island.  They tend to breeze right by on their way out to the Atlantic Ocean.  In an effort to insure that the world is well aware of the historic area that they are passing by, in 2015 the Mosquito Beach Business Association joined forces with the “Gullah/Geechee Sea Island Coalition” (www.GullahGeechee.net) to host an annual “Gullah/Geechee Famlee Day at Mosquito Beach” in order to bring awareness to the local and global community about the existence and history of “Mosquito Beach.”  Many enjoyed the inaugural event and vowed to support the continued restoration and preservation efforts of this Gullah/Geechee historic beach.
On Saturday, July 29, 2017 beginning at Noon, the third annual “Gullah/Geechee Famlee Day at Mosquito Beach” will be held at Island Breeze 2225 Mosquito Beach Road Charleston, SC.  Admission to the event is FREE.  Gullah/Geechee items and food will be on sale throughout the six hour long event.   There will be activities for the children as well as a Gullah/Geechee presentation by Queen Quet, Chieftess of the Gullah/Geechee Nation (www.QueenQuet.com), and music by DJ Sporty.
For FREE passes to the event, go to https://www.eventbrite.com/e/gullahgeechee-famlee-day-at-mosquito-beach-2017-tickets-33510881950. For more information, email GullGeeCo@aol.com or call (843) 452-0190.
Bring chairs and an open spirit and jayn de Gullah/Geechee famlee pun Skeeta Beach!